What is cellulose ether?

What is cellulose ether?

In the reaction formula, R represents CH3 or C2H5. The alkali concentration not only affects the degree of etherification, but also affects the consumption of alkyl halides. The lower the alkali concentration, the more the alkyl halide is hydrolyzed. In order to reduce the consumption of the etherifying agent, it is necessary to increase the alkali concentration. However, when the alkali concentration is too high, the swelling effect of cellulose is lowered, which is disadvantageous for the etherification reaction, and the degree of etherification is lowered. For this purpose, a concentrated lye or a solid base can be added during the reaction. The reactor should have a good agitation and tearing device to distribute the alkali evenly.
Methylcellulose is widely used as a thickener, an adhesive, a protective colloid, and the like. It can also be used as a dispersing agent for emulsion polymerization, a binder dispersant for seeds, a textile slurry, an additive for foods and cosmetics, a pharmaceutical adhesive, a drug coating material, and used in latex paints, printing inks, ceramics production, and in cement. Used to control the setting time and increase the initial strength.
Ethyl cellulose products have high mechanical strength, flexibility, heat resistance and cold resistance. Low-substituted ethyl cellulose is soluble in water and dilute alkali solutions, and highly substituted products are soluble in most organic solvents. It has good compatibility with various resins and plasticizers. It can be used to make coating materials for plastics, films, varnishes, adhesives, latexes and pharmaceuticals.
The introduction of a hydroxyalkyl group into a cellulose alkyl ether improves its solubility, reduces its sensitivity to salting out, increases gelation temperature, and improves hot meltability and the like.
The degree of change in the above properties varies depending on the nature of the substituent and the ratio of the alkyl group to the hydroxyalkyl group.
Representative of cellulose hydroxyalkyl ethers are hydroxyethyl cellulose and hydroxypropyl cellulose. The etherifying agent is an epoxide such as ethylene oxide and propylene oxide. Use an acid or a base as a catalyst. Industrial production is the reaction of alkali cellulose with an etherifying agent:

Carboxymethylcellulose is one of the most widely used water-soluble cellulose ethers. Used primarily as drilling mud, it has now expanded to include detergent additives, laundry syrups, latex paints, paperboard and paper coatings. Pure carboxymethyl cellulose can be used in food, medicine, cosmetics, and as an adhesive for ceramics and molds.
Cyanoethyl cellulose is a product of the reaction of cellulose with acrylonitrile under the catalysis of a base:

Cyanoethyl cellulose has a high dielectric constant and a low loss factor, and can be used as a resin matrix for phosphorus and electroluminescent lamps. Low-substituted cyanoethyl cellulose can be used as insulating paper for transformers.
In dry mortar, cellulose ether is used as a thickener and water retaining agent. Although the addition ratio of cellulose ether is very low (normally 0.02-0.7%), it is a very important additive. Among all the additives, the use of cellulose ether together with the redispersible powder can affect the properties of the dry mortar.
The cellulose ethers used in dry mortars are primarily early hydroxyethyl (MHEC) and methyl hydroxypropyl ether (MHPC), which have a market share of at least 90% in dry mortar. Although the true proportion of methyl cellulose ethers is very low today, they are still referred to as “methyl cellulose ether” or “MC” in the saying. Other relevant cellulose ethers that make up a small proportion of the dry blended mortar market share are ethylhydroxyethyl cellulose ether (EHEC) and hydroxyethyl cellulose ether (HEC). Since carboxymethylcellulose (sodium) is unstable in the presence of calcium ions, it is used only as a thickener in rare cases.
Most MCs for dry-mix mortar are powdered (MC here refers to MHEC and MHPC, as these properties are suitable for both materials, we collectively refer to them as MC). The particle size of 20-60% by mass is less than 63 microns. The MC particles in the dry mortar are dispersed between the binder and the bone particles to avoid agglomeration, which occurs only when the MC powder is poured directly into the water. Crude MC products, which are usually classified as granular materials, are easily dissolved in water and do not agglomerate, but they dissolve slowly and are not suitable for use in dry-mixed mortars. For dry-mix mortars with a neutral pH, particle size is not the only parameter that determines the solubility characteristics of MC. The surface of some grades of MC is covered with a large number of chemical crosslinkers (to reduce solubility), causing the particles to dissolve quickly only under alkaline conditions (eg due to cement or slaked lime). Alkaline causes the chemical crosslink to break immediately and dissolve the MC rapidly in the mortar. Initially, MCs with delayed dissolution characteristics were not specifically developed for dry-mix mortars, however, they are now widely used in the field of dry-mix mortars.
MC can reach a certain viscosity in pure solution and wet mortar. The difference between high and low viscosity can be clearly seen in a 2% aqueous solution. The MC determines its specifications by the viscosity measured at this concentration. The viscosity of this solution varies between water (viscosity (less than several hundred megapascals) and gel (viscosity of several gigapascals). Different MC manufacturers use different methods, including: Haake Rotovisko , Hoppler, Ubbelohde, and Brookfield methods. For the same product, the difference in viscosity results measured by different methods can be as high as several hundred percent, so keep this in mind when comparing the viscosity of MC products from different manufacturers.
The main function of cellulose ether in mortar is to improve the handling properties, which is commonly understood as water retention, and factors affecting the water retention of the mortar include cellulose ether viscosity, addition amount, particle fineness and use temperature. In general, the higher the viscosity, the better the water retention effect. However, the higher the viscosity, the higher the molecular weight of MC, and the lower the solubility, which has a negative impact on the strength and construction performance of the mortar. The higher the viscosity, the more obvious the thickening effect on the mortar, but it is not proportional. The higher the viscosity, the more sticky the wet mortar will be. When applied, it will exhibit a sticky blade and high adhesion to the substrate. However, the increase in the structural strength of the wet mortar itself is not helpful. When it is applied, it shows that the anti-sagging performance is not obvious. Conversely, some medium to low viscosity, modified methyl cellulose ethers have excellent performance in improving the structural strength of wet mortars. The greater the amount of cellulose ether added in the mortar, the better the water retention performance, the higher the viscosity, the better the water retention performance.

Relationship between viscosity and water retention rate:
For particle size, the finer the particles, the better the water retention. After the large particle cellulose ether is in contact with water, the surface dissolves immediately to form a gel to wrap the material to prevent the water molecules from infiltrating. Sometimes, the mixture is not uniformly dispersed and dissolved for a long time to form a turbid flocculent solution or agglomeration. . It greatly affects the water retention of cellulose ether, and solubility is one of the factors for selecting cellulose ether. Fineness is also an important performance indicator for methyl cellulose ethers. The MC requirement for dry mortar is powder, the water content is low, and the fineness also requires 20% to 60% of the particle size is less than 63um. Fineness affects the solubility of methyl cellulose ether. The coarser MC is usually granular and easily dissolves in water without agglomeration, but the dissolution rate is very slow and should not be used in dry mortar. In dry mortar, MC is dispersed between cement, fine filler and cement. Only enough fine powder can avoid methyl cellulose ether agglomeration when adding water. When MC is added with water to dissolve the agglomerates, it is difficult to disperse and dissolve. The coarser MC is not only wasteful, but also reduces the local strength of the mortar. When such a dry mortar is applied in a large area, the solidification speed of the local dry mortar is significantly reduced, and cracking occurs due to different curing time. For spray mortars that are mechanically constructed, the requirements for fineness are higher due to the shorter agitation time.
The relationship between cellulose ether fineness and viscosity: 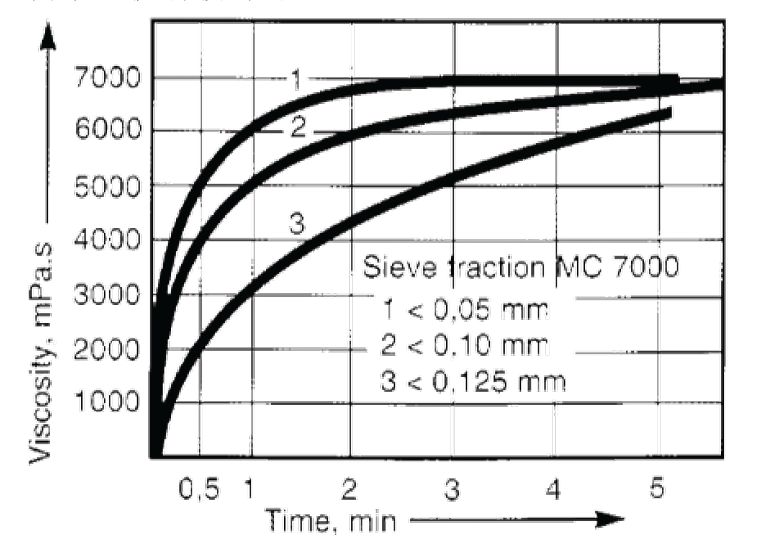 we are the direct manufacture for dry mortar and concrete additives in China.  we produce many kinds of HMPC based on different application, for more info and technical support, pls mail to sales@icelluloseether.com